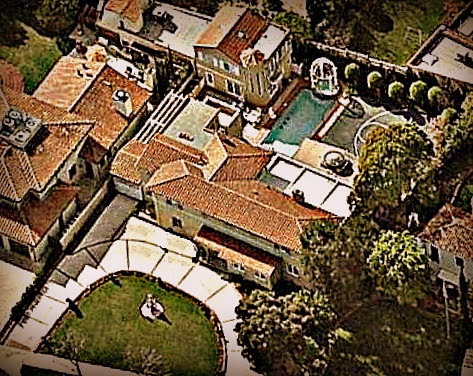 
One of the few houses to go up in Fremont Place during the Depression was #83, commissioned in the very depths of the crisis by wholesale druggist Julius K. Hornbein from esteemed local architect Ray J. Kieffer for a northerly portion of Lot 85. Reportedly having suffered financial reverses as a result of the economic conditions, Kieffer may have been designing for Hornbein his last major residential project in Los Angeles; Fremont Place, it should be noted, became a repository of his talents, with other of the architect's designs in the subdivision besides #83 including #127, #85 next door, #90 down the street, as well as the original, now destroyed #123. The Department of Building and Safety issued Hornbein a permit for his nine-room house on August 29, 1933, and for a Kieffer-designed garage three days later.

The full story of 83 Fremont Place will appear in due course.