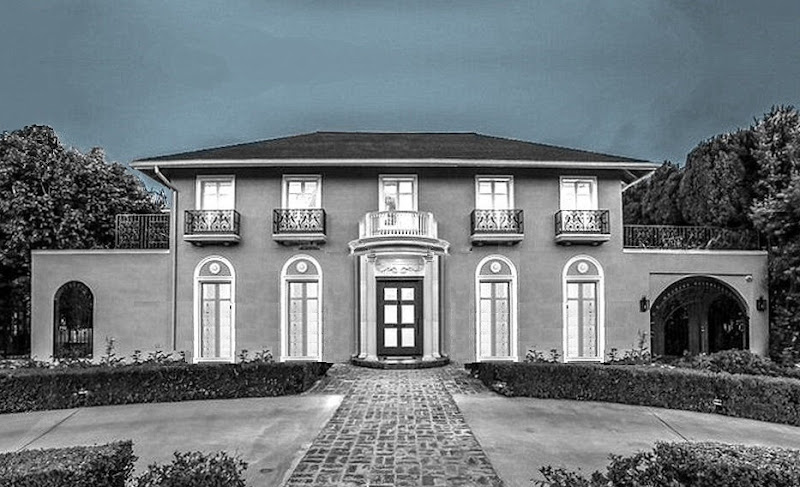 Such was the pace of Los Angeles's suburban development toward the Pacific that many houses as well as people moved west to new neighborhoods, including to gated Fremont Place. Residences less than 20 years old were routinely demolished, or left behind to become multi-family dwellings. But some houses traveled, if not in one piece then by slicing and dicing and reassembly on their new lots. While property-value-minded householders in new districts sometimes objected to the mobile houses proposed for removal to their neighborhoods as being too old-fashioned or insufficiently grand, the site of houses moving west across the entire width of Wilshire Boulevard, among other avenues, in the middle of the night was generally accepted as just another aspect of the process of homesteading in what was called into the '20s the West End of the city, only just then losing its prairie appearance. Two of Fremont Place's grander houses, those once on the sites of 31 and 70, moved from Wilshire and Catalina, and Hoover and 27th, respectively, have been demolished. One transplant that remains standing arrived on the northerly half of Lot 130 in 1926, coming from 332 South Ardmore Avenue, where it had been built on Lot 17 of the Norwood Terrace tract 12 years before. Mrs. Mary H. Jacobs had commissioned in-demand Pasadena architect Reginald D. Johnson to design the house in 1913 and was issued a permit for its construction by the Department of Buildings on November 3 of that year.

After Scottish-born businessman John Crombie Niven and his wife Nora acquired 332 South Ardmore, they hired master house mover George Kress to truck it to Fremont Place. Lot 30, at the southern end of Westerly Drive, had remained empty since the opening of the Place in 1911. The original idea of Fremont Place as a subdivision for large "in-town" estates rather than for conventional upper-middle-class suburban development had been abandoned by the mid-1920s, with Bel-Air and Holmby Hills now capturing the highest-end market. Lot 130 was split into two parcels, with the southerly 100-foot-wide site becoming 136 Fremont Place after real estate investor Hazel Slocum made plans to move a house from Alexandria Avenue to it. On July 22, 1926, the Department of Building and Safety issued John Niven a permit to move the Ardmore Avenue house to the northerly 75-foot-wide half of the original lot; on September 24, Mrs. Slocum was issued a permit to build a new foundation and basement for her house's relocation from Alexandria Avenue.

John and Nora Niven and their Yalie sons remained at 134 for many years, Robert eventually assuming ownership and maintaining it at least into the 1970s.