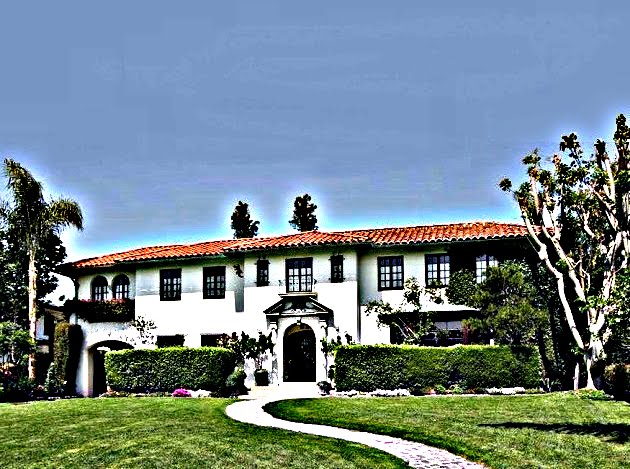 While far from the world of Iowa Picnics, just about every house in Fremont Place seems to have in its bones a little Midwestern DNA. While those living on the East Coast may have spent winters in Los Angeles when it could still claim itself a resort, many fewer of them appear to have settled permanently in Southern California before the Depression than did Buckeyes, Hoosiers, or Prairie dwellers. Even some architects who designed the houses and apartments buildings for newcomers could be traced back to drafting rooms in Chicago. In the case of the 1925 house at 73 Fremont Place, both its owner and designer were recent arrivals from that city, seeking to capitalize on the opportunities offered by the wildly expanding Southland.


Nels Gross, born in Oskarshamn, Sweden, in the '80s—even government documents present dates varying from 1883 to 1887—found his way to Chicago in 1906, within months of his arrival in America. A combination of Nordic attractiveness, prior connections, and perhaps cold ambition brought him along rather quickly in business, with marriage to a Mexican national, Berta Marburg, in 1910 and a daughter born a year later rounding out the picture for the next decade or so. Upheaval came within a few years of Mr. and Mrs. Gross's naturalization in late December 1919; while the details are unclear, Berta and little Leonora left to live in Paris once a divorce came in the fall of 1922 as Nels rearranged his own life. It is not known how long he knew the woman who would become his second wife, but Chicagoan Wilhelmina Boon, who had married Robert Esmond Grace in February 1919, given birth to a stillborn son four months later, and become the mother of Georg'Ann Grace in August 1921, was entering stage left. After her divorce, Wilhelmina Grace became the new Mrs. Gross and Georg'Ann Grace became Georg'Ann Gross. While neither Nels or even Wilhelmina, whose mother's family, the rich amusement-park-owning Schmidts, counted for much among Chicago's northshore-centric society, it appears to have been decided after their marriage in 1924 that their complicated and perhaps scandalous domestic arrangements would best be forgotten by all with a move to a distant shore. There was money enough on both sides to make the move in style; before long, the second edition of the Nels Gross family was living at the new Gaylord on Wilshire Boulevard in Los Angeles. Nels set out to re-establish himself in business and to find a permanent neighborhood suitable to his ambition. With Los Angeles society easily and famously scaled and the local press malleable, women's-page writers at the Times, for one paper, included the Grosses in coverage from the time of their arrival. Billie—as Wilhelmina was known to friends—went to work getting to know local matrons who gave teas and bridge parties; the appearance of her name on reported guest lists and her picture featured prominently by itself in the Times in December 1924 all aided in the buildup to a Fremont Place beachhead; the right façades, social and architectural, would be key to settling into a new life.

Once he bought the southern half of Fremont Place's Lot 73, Nels Gross contacted Postle & Postle, a firm with Chicago roots that had recently consolidated operations in Los Angeles. The Department of Buildings issued a permit for Postle & Postle's version of Southern California's architectural signature of the '20s—Mediterranean with a red-tile roof—on May 20, 1925; initial specifications called for a stucco-veneered house of 10 rooms with a footprint of 41 by 72 feet. Given its location and size, it was, of course, a major financial obligation; if Berta Gross had become aware of the project, it would only have strengthened her resolve to go ahead with her lawsuit to force Nels to keep to the terms of the divorce settlement; it seems he was claiming to have insufficient income to send regular payments. (One might also wonder how she felt about his adoption of Georg'Ann at the apparent expense of Leonora.) Meanwhile, Billie Gross was suing her uncle George Schmidt, president of Chicago's famous Riverview Park and administrator of her grandparents' estates, for more income than allowed by the spendthrift trust she had been left...all the legal wrangling taking place behind the scenes of the shiny new statement at 73 Fremont Place.

As its population was on its way to more than doubling during the 1920s, Los Angeles was becoming its modern motorized self of automobiles, boulevards, and appliance-filled single-family homes; among the last wave of city builders before the Crash of 1929 was Nels Gross. In the midst of his domestic reshuffling back in Chicago came one at Wolff Manufacturing Company, pioneer makers of plumbing supplies, that resulted in his resignation of the company's presidency. While he may have walked away with a golden parachute that augmented Billie's legacy and financed their move to the West Coast, Nels Gross wouldn't be spending his days golfing once he was settled in Los Angeles. He became president of the Pacific Seaboard Corporation, dealers in California municipal improvement bonds, which maintained downtown offices in the Van Nuys Building. When Pacific Seaboard was bought by the District Bond Company in the spring of 1928, Gross became president of the merged operations. By the end of the decade, the Grosses were also well established socially, if not quite yet Southwest Blue Book material. Unlike a surprising number of prosperous, childless Midwestern couples would build big houses behind the gates of Fremont Place, the Grosses would before long have a full house with the arrival of Marilynn Wilhelmina on September 5, 1925, and Nelson Boon Gross on Thanksgiving Eve in 1929. Nels's business interests grew to encompass real estate development, including participation in a syndicate buying a huge parcel at Solano Beach in San Diego County in 1928; he also that year became president of the Rancho Santa Fe Corporation. He was named chairman of the Rio Grande Oil Company and continued to build District Bond. Nels Gross's immigrant drive, his talent for business, and his understanding of the ins and outs of the downtown establishment all combined well with the very picture of upper-middle-class suburban respectability in Fremont Place—something distinctly Southern Californian, palm-lined and right out of the movies—that helped define a part of the country as distinct as the South or New England or the Midwest.

Nels and Billie Gross would be among those few Fremont Place couples who built original houses in the subdivision and stayed for decades—in their case, for 45 years. Georg'Ann, Marilynn, and Nelson would all grow up at 73. "Jo," as George'Ann was known, attended the Bishop School and was graduated from Marlborough (as would be Marilynn) before heading east to two-year Pine Manor (known affectionately to some Harvard men as "Pine Mattress") and then marrying Ensign George Mason Letteau on July 8, 1941; it seems that Mason, a Stanford graduate who had been east at Harvard Business School and recently engaged and disengaged to a sophisticated young fixture of New York and Palm Beach society, decided instead on a hometown girl. Not just a hometown girl, but one from right around the corner: Mason had grown up in the house his parents, the George Henry Letteaus, had built at 132 Fremont Place in 1924. After a ceremony at St. John's, the establishment Episcopal church, a reception with a "rose-champagne and peach" floral theme was held at 73. With Mason now overseas, a son, Robert—interestingly, the name of Georg'Ann's birth father—was born on May 17, 1942. Eight years later, after a divorce and a new Mrs. Letteau, George'Ann married Fred Cutter in a quieter ceremony in Laguna Beach, soon settling into a house on Victoria Avenue three blocks from her parents.

On the face of it, life at 73 Fremont Place seems to have barely missed a beat during the depressed '30s. The Grosses employed live-in servants including a cook and a baby nurse for Nelson in 1930; 10 years later, there were still a cook and a houseman. District Bond survived the darkest economic years; in 1935, the company was joined by banker and oil-and-gas executive Charles F. Stern of 10 Berkeley Square. In 1942 Nels formed a new securities venture—Gross, Martin & Company, renamed Gross, Van Court & Company the next year. The family acquired a second home at Emerald Bay in Laguna; Billie maintained her schedule of luncheons and volunteer work through the war years as Georg'Ann married and Marilynn and Nelson finished high school, he at Harvard. After Marlborough, Marilynn went on to Stanford and U.C.L.A., where she was studying for her doctorate in psychology when she married psychiatrist Theodore Polos of Malibu on February 23, 1952. Following another St. John's ceremony—one at which Georg'Ann's son Robert Letteau was the ring bearer—another wedding reception was held at 73 Fremont Place, this one decorated with apple blossoms and pink tulips. After Nelson married Susie Raddon in the fall of 1954, the halls of 73 grew quiet except during visits by a growing flock of grandchildren, which would eventually number 10.  Nels retired in March 1957, selling what was now known as Gross, Rogers & Company to the First California Corporation. Even as they then began to spend time away from Fremont Place, and the fortunes of central Los Angeles in particular grew dim as the city came under the clouds of pollution, white flight, and crime that reached flashpoints with the Watts Riots in August 1965 and the Tate-LaBianca murders four years later, Nels and Billie kept the house. Among those particular civic-minded Angelenos who saw the dreamlike 20th-century incarnation of the city peak within 40 years of their arrival, Nels Gross died somewhat neatly on November 13, 1970. Before she died on September 27, 1979, and joined Nels at Forest Lawn, Billie moved to a more manageable house in Studio City and became even more heavily involved in the Holiday Humane Society, the pioneering animal-rescue operation she had founded in 1964. The house built by the Grosses in 1925 at 73 Fremont Place was sold during a period that saw an overseas bid for the entire subdivision to be redeveloped into an office park. Fortunately, what was well into the '20s called the West End of Los Angeles—and one of its signature neighborhoods—managed to survive and regain popularity after healing from dark decades culminating in the riots of April 1992. It turned out that Mediterranean houses would at long last find new favor.