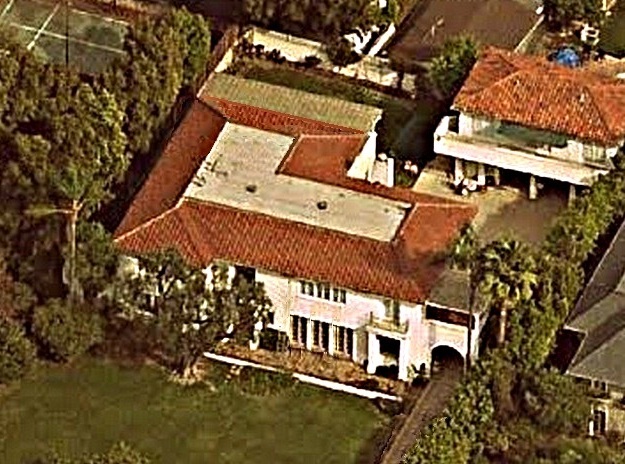 Ambition born in St. Cloud and raised in Duluth built 132 Fremont Place. After experiencing enough rough winters to last a lifetime and once he realized that he might be able to push real estate with greater success out west, year round, George Henry Letteau, like many a Midwesterner, left his home state for Los Angeles in late January 1903 and scarcely looked back. He checked into the Hotel Nadeau on Spring Street; once settled in his new city, Letteau went into business peddling lots with William H. Earle. Before long, he crossed paths with the opportunity of a lifetime named Lula Nevada Entwistle Hinton. A widow as of October 1903, Mrs. Hinton was left with four children, a nice portfolio of property south of downtown, and real estate in her blood. Brought to California in 1873 from Lake Mills, Wisconsin, by her farming father and mother at the age of 12, Lula grew up on Two Pines Ranch, bounded by what are today 42nd Street, Avalon Boulevard, and Vernon and McKinley avenues. Having inherited the ranch after her Irish-born father died in June 1901 and fully aware of the rapid streetcar-driven development all around it, Lula turned Two Pines into the Entwistle Tract, planned with a grand carriage-and-pedestrian gate, one perhaps in emulation of contemporaneous Berkeley Square and in anticipation of Fremont Place but leading to considerably more modest houses. Part of her real estate education had come from her Detroit-born husband, John W. Hinton, whom she'd married in 1883; a teacher who also dealt to advantage in real estate during the boom of the '80s, Hinton served as the superintendent of schools for Los Angeles County and was elected city assessor in 1890 while he continued his property business.

Forty-three-year-old Lula saw something attractive in 26-year-old George Letteau and hired him to be the Entwistle Tract's agent-on-site. Apparently gifted, the young buck was before long given wads of cash to buy up more acreage. As the Times described it on March 1, 1906, "a youthful Monte Cristo has thrown the town of Compton into a flurry." George got busy "peeling off somebody's crisp greenbacks and gold coins by the handful; buying everything in sight at any old price, busy as though he had to annex the whole landscape before lunch and tackle the moon after dinner." When asked what he was up to, he would mumble something about buying a ranch for his mother, although Augusta Letteau was back in Duluth where she would remain for the rest of her life. Motherly Lula Hinton was smitten by her agent's chutzpah; he was dazzled by the cash and visions of a Southern California life beyond what an ordinary boy from Minnesota might have ever expected, as well as by the widely admired woman herself. They made a good team; December and May were married in Oakland in July 1906 and spent the rest of the summer in Hermosa Beach where they bought more property for development. The newlyweds then joined the children and Mrs. Entwistle at Lula's house at 1033 West Seventh Street; soon, with their holdings south of the city rapidly being covered by hundreds of modest bungalows and profits rolling in, and with downtown Los Angeles becoming increasingly crowded, the Letteaus moved to Sierra Madre. Curiously, the ages reported to the 1910 Federal census enumerator narrowed the gap between between George and Lula by 10 years; at any rate, newly youthful Lula became involved in civic and club life in Sierra Madre, as she had been in Los Angeles as a member of the exclusive Friday Morning and Badger clubs. Along with riding her coattails into high cotton, George rode into society, his life's die now cast—which is not to say that he was devoid of his own talent and drive. There was plenty of both. In 1905 he became one of the original investors and organizers of the Inglewood Park Cemetery Association, which was developing a 300-acre site seven miles southwest of downtown; he would eventually rise to the organization's presidency in 1924, the year he built 132 Fremont Place.


Meanwhile, on the personal front, Lula Nevada Entwistle Hinton Letteau died in her prime on April 22, 1911, suffering a fatal stroke during the Sierra Madre Floral Carnival—"Always prompt in life, she was no less in death, and went home with a smile upon her face," as one tribute put it. She was buried not at Inglewood but at Rosedale, alongside her first husband in the Entwistle plot. George Letteau, now just 33, successful and energetic, would wait a respectable year to remarry. He'd met 25-year-old Kansas-born Merry Marguerite Mason, late of Kansas City. After they were married on May 15, 1912, Merry moved into George's house in Sierra Madre; that fall, they took a trip to New Orleans and then to meet family in Missouri and Minnesota. Over the next decade, the Letteaus would be mentioned frequently in social columns while George tended to Inglewood Park and invested in various other businesses. In 1910 alone, he became an investor in the United Midway and Midway Valley oil companies as well as the Empire Smelting and Mining Company; with Merry, he incorporated the Electric Laundry Company in 1914. On the homefront, a son and heir, George Mason Letteau, arrived on May 23, 1916. There was a blip in the idyll in 1918 when George was indicted along with a co-conspirator, a shady café owner and real estate operator named Ezra Rabin, for allegedly preparing and submitting false evidence in an eviction case; Rabin received probation with the condition that he stay out of the real estate business; with some indication that George had been duped—and, it might be said, possessing much better establishment connections than Rabin—the case against him was dismissed. Letteau continued on in business and, to relax, playing golf in country club tournaments; between card parties, Merry ran the household in Sierra Madre and its retinue of servants that included a cook, a nurse, a gardener, and a laundress. Merry's parents moved from Missouri to a house down the street. Mr. Mason—described by the Times as a retired capitalist—dropped dead in his yard while feeding his chickens one summer day in 1921; perhaps for a fresh start, perhaps for young Mason's schooling, the extended Letteau family began to think about a move to the city that would also mean a shorter commute for George. They began envisioning the house on Fremont Place in which they would live for decades.

While the original plan at the opening of Fremont Place in 1911—at least for promotional purposes—was to appeal to those who imagined themselves living on "in-town estates," sales of its large lots were not brisk. Very soon there was subdivision within the subdivision; with the full 166-by-257-foot Lot 124 at the southeast corner of Tenth Street and Westerly Drive (as Fremont Place West was originally designated) still vacant in 1923, its southerly 102 feet was sold as a separate lot to George H. Letteau. As plans evolved, the Letteaus decided on a 12-room stucco house in the most fashionable architectural style of the day, if one fated to become overly associated with the decade after its final dark months. Curiously, the permit issued for the residence by the Department of Buildings on May 9, 1924, signed by the contractor, Ben L. Gubser, does not specify an architect—perhaps it was Mr. Gubser's firm that designed the 80-by-68-foot red-tile-roofed Mediterranean for the Letteaus, or perhaps George called in a favor. Once the house was completed and George and Merry and Mason and Mrs. Mason had moved in, another piece of family real estate became a concern. It seems that George saw an opportunity to reacquire lots in the Entwistle Tract, long since covered with modest houses despite its grand gates; per Bound for Freedom: Black Los Angeles in Jim Crow America by Douglas Flamming, the subdivision "was [in] an all-white, relatively undeveloped part of the city. The property deeds nevertheless contained restrictive covenants...[which] stated that if the provision was violated, the property would revert back to the original owners, that is, the Letteau family." In the protracted proceedings, the court first found in favor of Lula Letteau's heirs, a ruling that then gave them the temerity to sue every African American homeowner in the Entwistle Tract as well as Caucasian owners renting to blacks. Meeting defeat in July 1928, it was not until after several aggressive appeals by the Letteaus that the California Supreme Court ruled against them on June 13, 1932. Almost imperceptibly behind the gates of Fremont Place and other northerly white strongholds, the future of South Los Angeles—as well as West Adams including Berkeley Square—was being determined. The Letteaus—not alone and to whom contemporary judgments cannot be fairly applied—retreated into the increasingly outmoded idea of Los Angeles as the "White Spot" of the West.

Mason was sent to the new Carl Curtis School; eventually entering Stanford, he went on to Harvard Business School, class of 1940. While east, he met the beautiful New York and Palm Beach socialite Betty Louise Scheer. Their engagement was announced prominently in The New York Times on December 19, 1939. Perhaps it was the oil-and-water mix of less uptight California society with considerably more dazzling and sophisticated East Coast society—Southwest Blue Book versus Social Register—that resulted in the marriage not taking place; perhaps it was his schooling, perhaps talk of war. At any rate, Mason, perhaps deciding that Palm Beach was over his head, went very much home. On July 8, 1941, he married beautiful Fremont Place girl Georg'Ann Gross instead. "Jo," as she was known, had grown up with Mason, living in another Mediterranean house just around the corner at #73. He had received his commission as an ensign in the Naval Reserve at Annapolis the month before. While he was overseas, a son, Robert, was born on May 17, 1942. Perhaps owing to haste and wartime upheaval, the neighborhood marriage, sadly, did not last. Mason remarried in 1947, his new bride being divorcée Wildell Washburn Davis; Billie, as she was known, wore ominous black at the quiet October 25 ceremony in Santa Barbara. It wasn't long before Mason was free again, apparently remaining so until marrying Betty Barner on April 27, 1959.

Meanwhile, George H. Letteau was ailing in the late 1940s as he approached the 25th year of his presidency of Inglewood Park Cemetery. He died at home at 132 Fremont Place on October 20, 1949, age 71, and was entombed at the Mausoleum of the Golden West at Inglewood under stained glass by the Judson Studios. Though not necessarily a merry widow, Merry decided to sell their longtime home and travel. One-thirty-two began to be advertised in the Times in the spring of 1950, with copy noting that the sale of the four-bedroom, three-bath house was "to settle an estate." Insurance man Thomas G. Murrell bought it and would remain at 132 until 1962. Merry set off on a round-the-world cruise, settling at the still-fashionable Talmadge at Wilshire and Berendo on her return in the spring of 1951. Perhaps there was only so much distraction from the loss of George; she died in her apartment only a few months later, on August 30, and then joined her husband at Inglewood Park.

Mason had followed his father into the cemetery business, having been elected executive vice-president of the Inglewood Park Cemetery the year his father died. He was named president himself in February 1957, the fourth of the Association and second Letteau; he later become general manager and CEO. He had also participated in the establishment of Eternal Hills Memorial Park in Oceanside in 1948; a plaque in his memory was placed there after he died at St. John's Hospital in Santa Monica on May 27, 1968, just 52 years old. His son, Robert, grew up to be an attorney and a councilman for the city of Inglewood. He was appointed a Los Angeles County Superior Court judge based in Van Nuys in 1982 and sat until his retirement 20 years later.