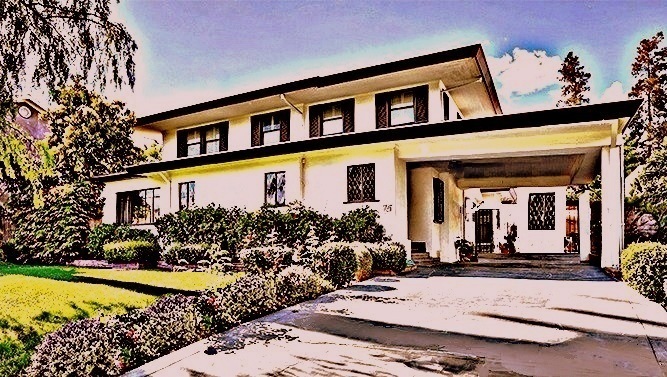 
Emma May Eygabroad was a native Minnesotan who turned up in Los Angeles in 1913 with what was appears to have been quite a settlement after recently divorcing her husband. Back in St. Paul, George Eygabroad had been a banker dealing in real estate and mortgages; perhaps not only did Emma make off with a nice pile to invest on her own in California, but the know-how as well. She began investing in lots as soon as she became established socially, good society being all part of the plan for reinvention on the west coast. While Emma would form a relationship with, and on some projects make full use of the construction partnership of Sanson M. Cooper, Emery C. Pyle, and William E. Clopine (thus employing Cooper, the firm's designer, for those undertakings), for her own new house she had the organization build to the Prairie-esque plans of architect Harry H. Whiteley, spending $8,000. Emma had bought a 75-foot-wide lot straddling Fremont Place's lots 73 and 81 in June 1916; on June 15 of the same month, the Department of Buildings issued her a permit to begin construction of 75 Fremont Place. Along with indicating Whiteley as architect and Cooper-Pyle-Clopine as contractor, the permit, interestingly, lists an address of "925 South Easterly Drive," the early designations of the north-south roadways of the subdivision being Easterly Drive and Westerly Drive; the number "925" would have been house's address had Fremont Place not sought exclusivity in addition to its gates by formulating its own rather confusing address system, rather than conform to the city's system.


Even before 75 Fremont Place was completed, Emma Eygabroad took a new name to go with her new house. Lewis Orvil Harvuot was another Midwesterner, as Hoosier in his case, who had been kicking around Riverside, San Diego, and Imperial counties as a banker dealing in property abstracts. He'd left his wife and young son in 1910 and eventually turned up in Los Angeles, where, presumably, he met Emma in the course of one of her deals. They were married in the fall of 1916 and soon moved into 75. The house was one of the earliest in Fremont Place and one of the first to sit on a lot carved from one of the subdivision's original parcels, initially promoted as suitable for "in-town" estates. The first houses sat in treeless rolling prairie until the postwar boom hit Los Angeles in earnest.

While Emma Harvuot—now a real estate team with her new husband—appears to have enjoyed a certain status as a socialite, now with a posh house in Los Angeles's up-and-coming West End, she was also a businesswoman interested in turning a profit. Elizabeth Signor, whose husband, George, a purveyor of ties to the railroad industry, died in June 1918 after the couple (originally from Shreveport but living in Fresno with extended family for the past decade or so, and recently in Ocean Park) soon after acquired the Harvuot house. The widow Signor wouldn't be rattling around #75's thirteen rooms all by herself—her 20-year-old granddaughter, Mary E. Burton, would be in residence, as well as, at least at first, Mary's stepfather, Clarence J. Gilbert. (Curiously, Mary's mother, Lucy Signor Burton Gilbert, appears to have chosen to live elsewhere in the city.) Among the building records pertaining to #75 are two interesting oddments: although a garage had been built on the property in 1916, Mary, rather than her grandmother, took out a permit to build a second one, to be designated 75½ and presumably with some sort of living quarters, on November 1, 1921; stranger still are permits issued on October 20, 1922, to one "G. L. Palmer" of Whittier. It seems that Palmer was proposing a house and garage on Lot 75, to be numbered 75; since there is no indication of there having been a fire or other catastrophe that would have required the replacement of the Signor house, the permit may have been one intended for the lot just to the south, a house completed in 1923 that became #77, or for one to the north of 75, on which Nels Gross's #73 would be built three years later.


Elizabeth Signor, who'd traveled around the world in 1924, died on May 26, 1926, just shy of her 80th birthday. The family appears to have then left #75. Ownership of the house then passed to Gilbert M. Furman, who made some alterations to the servants' quarters but did not move in. Whether Furman flipped the house or retained ownership (or whether his family did after his death in 1933), is unclear, but the family renting it by 1929 would be that of Herbert Roderick Macmillan. It seems odd that Macmillan, who was not only an attorney but president of the Macmillan Petroleum Company as well as the California Oil and Gas Association, would have been a renter; it seems likely that the company held title to the house and the family paid a token monthly amount, enough to satisfy the IRS.


The Macmillans would have one of the longer tenancies at #75, staying beyond 1940. On May 27, 1931, Alice Ann Macmillan married into Old Guard Los Angeles when she became Mrs. George Augustine Dockweiler; the ceremony and reception, coinciding with her parents' anniversary, were held at home. As Macmillan family life evolved, Mrs. Macmillian died in 1934, after which the household appears to have been quiet as Herbert devoted his time to business. An incident at home on February 4, 1942, precipitated the end: while visiting her gandfather, two-year-old Brenda Dockweiler discovered some tasty-looking pills that resulted in her having to have her stomach pumped at the Hollywood Receiving Hospital. Within months, 75 Fremont Place was on the market. Classified ads during the summer offered it as a "real bargain"—which indeed it does seem to be—at $14,500. Herbert Macmillan died in his apartment at the Chateau Elysee (now Scientology's "Celebrity Centre") on January 13, 1945.

By the spring of 1948, 75 Fremont Place had been acquired by Frederick Maurice Laserson and his wife, Freda. It was at this time that a major change was made to the house's façade by the enclosure of two-thirds of the porch to provide more living space. Laserson was a real estate investor who owned properties in Beverly Hills and elsewhere; with Rabbi Edgar Magnin officiating, the Lasersons' daughter Vera was married to Dr. Jack L. Kahn at #75 on December 4, 1949. The family's stay in the house would be brief; it would be on the market from at least September 1952, starting at $45,000, until early 1955 when it was bought by attorney Lloyd S. Nix. Nix was a former city prosecutor who would that March be appointed to a Superior Court judgeship by Governor Goodwin Knight, himself a one-time Fremont Placer around the corner at #120. Nix and his wife Helen, who had four grown children, would remain in the house until soon after his retirement from the bench in the fall of 1967; perhaps having tired of Los Angeles, not then in its best form, they moved to Rancho Santa Fe.

Enter the longest tenants by far of 75 Fremont Place, the family of wrestling promoter Mike LaBelle. Mr. LaBelle died in 2009; in the summer of 2015, nearly a 100 years after it was built, its interior apparently stuck in the gruesome '70s, Emma Eygabroad Harvuot's house has reportedly been sold to actress Bridget Fonda and composer Danny Elfman for $3.6 million. The Hollywood couple already owned the Jones/Hole/Rindge house and its massive wing at #114, which conveniently backs up to their new acquisition. With modesty in Los Angeles houses gone completely out of fashion, even in fusty Fremont Place, will #75 survive into its second century?