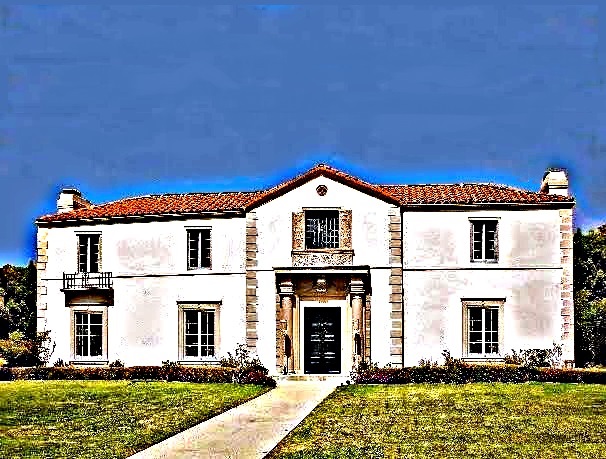 After World War I, with the city's population about to enter another spectacular period of doubling, eastern West Adams especially began to offer homeowners large profits as their houses became attractive to subdividers of both buildings and lots. To the north, the explosion of automobile traffic along Wilshire, known as "the highway to the Pacific" even before it was paved, put the kibosh on the boulevard's residential future, as did the resulting attractiveness to commercial interests seeking to expand from downtown. Once the West End began to leaf out, Fremont Place became attractive to those seeking new houses on lots larger than had been the Los Angeles norm for decades. Some even moved very large houses to the West End, including two notable relocations to Fremont Place: 70 from Hoover between 27th and 28th and 31 from Wilshire and Catalina. While it seemed that the West End might suffer a leapfrogging with the competition for sales increasing dramatically as Beverly Hills, Bel-Air, Brentwood, and Pacific Palisades began to attract old Angelenos in large numbers, it managed to hold its appeal with its more central location. In general, Windsor Square and Hancock Park—which began sales a decade after the former—gained from a developing bias among locals in favor of new districts north of Wilshire over those even just below the boulevard, something like the later perception of the demarcation of Sunset in Beverly Hills. For unclear reasons, Fremont Place appears to have been especially attractive to newcomers from the Midwest; an exception was dry-goods wholesaler Henry Klein and his wife Mamie who were in residence by mid 1924.

By the '20s, both Henry and Mamie Klein would be considered almost pioneer Angelenos, with roots in the city considerably older than much of the local WASP ascendancy. Born on October 5, 1857, in Trebišov in eastern Slovakia (then part of Hungary), Henry later joined a wave of immigrants arriving on the American east coast in the mid 1870s. He came with his first wife, Minnie, and a daughter, Theresa, working for a time as a peddler in the Alleghenies before opening a store in Huntington, West Virginia. After a time the family moved to Newark, where Henry appears to have made the acquaintance of the woman who would in time become his second wife and whose father would help secure their future when both families met again on the Pacific Coast. Though some sources indicate an arrival two decades earlier, Simon Friedman Norton, after numerous trips back and forth across the country to visit his growing family in New Jersey, appears to have settled in Los Angeles permanently in the late 1870s, becoming naturalized there on May 1, 1879; his wife and six children, including Mamie, joined him from Newark soon after. Simon Norton had entered a downtown dry-goods market crowded with other Polish-born Nortons who appear to be cousins. Henry, Minnie, and Theresa Klein arrived in Los Angeles a decade or so later, Henry soon giving Simon still more competition by opening the Star Clothing Company at the city's bullseye—the corner of First and Main streets. After several years and the death of Minnie in May 1895, Henry entered into two important new unions with Norton family members. He married Mamie on August 23, 1896, and within a few years was in partnership with Simon and the younger two of his four new brothers-in-law, Aaron and Isaiah Norton. Despite the preponderance of Norton partners, the new firm would be called the Klein-Norton Company, incorporated in February 1903. The new Klein-Norton business model was to shed Henry's retail Star Clothing Company on Main Street and consolidate into a strictly wholesale operation dealing in "Mens' and Ladies' Furnishing Goods and Notions"; better union suits were a specialty.

Meanwhile, in a new western suburb to which the extended family had recently moved from South Hill Street, Henry and Mamie would have their own child, Arthur Louis, born April 10, 1898. The Nortons appear to have been happy to have Henry assume the role of paterfamilias in domestic matters as well as in business; in addition to the Kleins, including Theresa, Simon and his five other children, none yet married, would move into 1010 Beacon Street. Simon died in the house in January 1902. Social columns in the Times and the Herald noted various happier occasions there, including Theresa's marriage to businessman Isidor Eisner in November 1900. Also noted five years later was the Eisners' acrimonious divorce, in which Isidor cried in court as he described his wife's cruelties, including her pulling his ears and pinching him painfully, correcting his pronunciations, squandering their money, and mocking his devotion to their baby. Before the end of the decade, the household would be pared down considerably and have moved west with the city—every decade, a new "west end" of Los Angeles would develop. In late 1908, Henry and Mamie, along with just Arthur and Isaiah, would be living in a house at the southwest corner of Sixth and Vermont. Ten years later, with creeping commercialism and motor traffic and at their corner reaching record levels, the Kleins backtracked a bit, both geographically and in terms of their living arrangements. They were living comfortably at the fashionable Bryson in 1918; soon after, they moved around the corner to the new Wilshire apartments at 671 South Coronado Street. They would stay there near Westlake Park for five or six years until apartment living grew tiresome and until, despite being empty-nesters, they heard the call of a big brand new house in the city's newest West End. The original large lots of Fremont Place that remained unsold were being cut up; the Kleins acquired the south half of Lot 121. The Department of Buildings issued permits for a 10-room house an a garage on February 28, 1924. The initial address was 123, which was adjusted to 125 when Dr. Frank S. Barnard took out permits to build a house on the north half of Lot 121 later in the year. The Kleins' restrained Mediterranean villa was designed by architect and contractor Kenneth Albright early in his career.

The Kleins still had one child in tow when they arrived at 125 Fremont Place. Arthur had resisted his father's wishes that he join Klein-Norton, and his mother's that he become a doctor; instead, after having been graduated from Los Angeles High School in 1916, he found his own métier in Pasadena. He would go on to earn B.S. and M.A. degrees as well as his Ph.D. in physics at Caltech and then remain there as a professor of aeronautics. Dr. Klein appears to have maintained his official address at 125 until his parents' deaths in the early '30s; he married late, but with a good excuse: He was becoming a focussed leader in his field as well as a consultant at Douglas Aircraft, where he would evaluate, among other projects, the company's long line of commercial planes, from the DC-1 onward. He was selected to be part of a panel of experts convened to evaluate the atomic bomb tests on Bikini Atoll. (As one biographical sketch of the Kleins puts it, "Quite a way for a Hungarian peddler's son to go!") Arthur was also busy juggling a third career, if reluctantly; when Henry decided to retire from Klein-Norton in the late '20s, he named his son as the nominal head of the company. Although it was a post Dr. Klein would hold into the 1970s, his first cousin Stephen Nordlinger gradually assumed most responsibilities.

Henry Klein died at Cedars of Lebanon on March 31, 1932, after a three-day illness. He was 74. Mamie was not long behind him; she died at home on January 16, 1933, at age 61. The disposition of 125 Fremont Place is somewhat sketchy. An "Auction Superb," as it was advertised, wasn't held until April 8, 1935; on the block were all the usual heavy furnishings of the period, as well as the house itself. Described simply as a 10-room dwelling on large lot, its reserve seems not have been met. It appeared for sale in Times classifieds over several months later in the year, with "foreclosure" mentioned. The Depression lingered, and, as with Victorians and Tudors and Craftsmans before them, big Mediterranean houses were white elephants, old-hat in the '30s, and perhaps too much of a reminder of better times. Arthur was the administrator of his parents' estates and, unless it was sold to an investor after its appearance in the Times, may have decided to keep 125 and rent it himself when a new big cheese got off the Union Pacific's Los Angeles Limited.

Enter an engine of economic recovery: While General Motors's decision to build a massive Buick-Oldsmobile-Pontiac plant in Southern California, to begin assembly operations at South Gate in the fall of 1936, would be good for real estate interests catering to line workers, there would also be the housing needs of executives. One suit in need of a suitable residence was the corporation's go-to man for overseeing new plant operations, G.M. veteran Raymond J. Wilkins. Lately manager of a plant in Tarrytown, New York, Ohio-born Wilkins had begun his career in Michigan with Buick, working his way up; renting in Los Angeles as he had in New York, he and his Michigan-bred wife Ruth arrived in March 1936. Though childless, 125 would have been appropriate for an industrial bigshot; certainly Fremont Place, symbol of arrival, seems to have attracted a large share of prosperous Midwestern couples who rattled around in room after room when not entertaining. Although a corporate gypsy—the Wilkinses would be called back to Detroit in the summer of 1941 as the country prepared its defenses—Ray did his local civic duty by serving as a director of the Los Angeles Chamber of Commerce. General Motors knew how to build itself along with the city, and having a talented man in charge, one who could glad-hand as well as direct a major industrial enterprise. In its first nine months of operation, even before expansions overseen by Wilkins, 50,000 1937 Buicks, Oldsmobiles, and Pontiacs came off the South Gate line.

Once the Wilkinses left 125 Fremont Place, the house appears to have finally been bought by Charles McLean Crawford—not to be confused with Charles W. Crawford later of #61. C. M. Crawford was born in Pittsburgh in 1890 and came to Los Angeles in 1913. Entering the field of property management, he later became the general manager of the Dominguez Estate, owned by the descendants of the original recipient of a 76,000-acre land grant southwest of the city. When he moved to Fremont Place, it appears that he had recently remarried, his new bride being divorcée Ann Stapp; the couple would live at 125 until close to the time of his death in May 1963. For several years during the '60s, Anthony Heinsbergen Jr. of the famous Heinsbergen Decorating firm on Beverly Boulevard was in residence.

On the market several times in the intervening decades, 125 Fremont Place appears to have changed little from the time it was built. Sometimes deferred maintenance has charm. 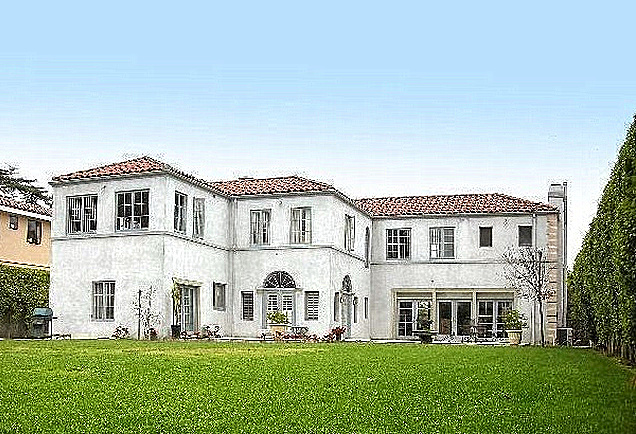