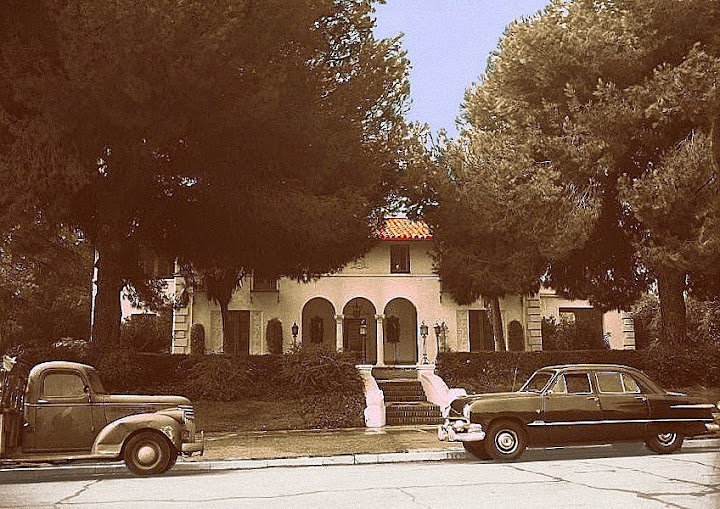 Hotels were a good investment at the turn of the American 20th century, particularly in an alluring and ingeniously advertised city undergoing a decades-long expansion beyond its earliest citizens' wildest dreams. Some men who made their piles pursuing other projects that were lucrative in rapidly developing markets—bankers and real estate wheeler-dealers, for example—crowned their achievements with eponymous hostelries. Henderson Hayward of Wilshire Boulevard opened the Hotel Hayward at Sixth and Spring in 1906; among other of railroad tycoon Eli P. Clark's downtown projects was the Hotel Clark on Hill Street. Some Los Angeles businessmen formed syndicates to build hotels, as happened when names such as Joseph Sartori, Marco Hellman, Harry Chandler, and Lee Allen Phillips organized the Central Investment Corporation to put up the Biltmore, which opened on Pershing Square in October 1923. Then there were those whose eventual fortunes derived primarily from innkeeping, the caravansary-steeped Hart brothers chief among them.

George Alandson Hart and Dwight Howard Hart had come to California from northeast Ohio in 1888, six years after their father had moved west. In California, Henry Hart managed the grand Victorian Bellevue Terrace, which was downtown on the site of today's Jonathan Club; in 1890, he bought another important Los Angeles inn, the Natick House at First and Main. It was here that George and Dwight, who later became a California state senator, began their own hotel careers as bellhops. Assuming management of the Natick House after their father died in 1892, the boys were on their way to the sort of prosperity that made it possible for Los Angeles muckety-mucks to build big houses in such neighborhoods as St. James Park, along Adams Boulevard and Wilshire Boulevard, and in Berkeley Square and Fremont Place.

As the Gilded Age evolved, interrupted as our own has been by economic downturns, the Harts went into high gear. In July 1903, they added the original Hotel Rosslyn on Main Street to their holdings. Three years later, they bought the adjacent Hotel Lexington to expand the Rosslyn. Their big move came when they bought the prominent corner just to the south, most recently the site of one of William H. Clune's theaters. Here the Harts built the New Hotel Rosslyn, designed by John Parkinson and opened on November 9, 1914, George's 44th birthday. A proposed northward expansion three years later to replace the old Lexington structure and the original Rosslyn was delayed and then changed in 1922 to instead jump across the street when the Harts leased the southwest corner of Fifth and Main. The New Rosslyn Annex would be connected to the main hotel by passageways under Fifth Street, including one lined with marble for hotel guests. The Harts again called on Parkinson, now partnered with his son Donald, to duplicate the details of the 1914 building. When the New Rosslyn Annex opened on December 29, 1923, it took the title of largest hotel on the Pacific Coast; with rooms now totaling 1,100, it eclipsed in size the much-ballyhooed Biltmore that had opened nearby two months before. It was a period of building for George Hart: The same year he began planning the New Rosslyn Annex, he was also in the process of upgrading his domestic arrangements. Living comfortably at 611 Shatto Place, he and Ida Belden Hart, a Buckeye he'd married in 1894, decided that the prestige and relative roominess of Los Angeles's West End of the time suited their continuing upward mobility. Judging by the entertaining that was to be covered by society scribes over the next two decades, their ambitions for the new house at 107 Fremont Place were considerable. And business only got better and better: At one point George, as biographers have described his career, owned real estate in Hollywood and Ocean Park—a resort some credit him with having put on the map—as well as 10,000 acres in Tulare County, where he developed the towns of Terra Bella and Richgrove.

Perhaps it was as guests that the Harts admired Clem and Pearl Wilson's Mediterranean palazzo built at 108 a few years before. Taking note of the Wilsons' architects and the empty lot across the street, their domestic dreams began to take shape. Meyer & Holler won the commission, and, not long after a rendering of the house appeared in the Times on March 12, 1922, and the Department of Buildings issued its permit to begin construction five days later, Fremont Place gained another of the many Mediterranean efforts of the prolific team of architects and their construction division, the Milwaukee Building Company. The parties began forthwith. The house would be home to the Harts for 20 years, George dying there on September 27, 1929. Even if the $5 million estate he left at his death had dwindled during the Depression to $3.7 by the time of probate in 1933, it was still a testament to the Hart brothers, who achieved their success with privately owned hotels, unsubsidized by any chain. Ida Hart stayed on at 107, barely slowing her entertainments, until she died at home on April 25, 1942; her brother-in-law Dwight died one month to the day later.

The disposition of 107 Fremont Place after the death of Ida Hart is unclear; Robert, the Harts' 28-year-old only child, had been living at home until he enlisted in the Army the summer before his mother's death. It would be another family member who would be making use of 107 after the demise of Mrs. Hart, who was mercifully spared the large article in the Times on July 3, 1943, headlined MANY BEATINGS LAID TO TRUCKER IN WIFE'S SUIT. Described were the embarrassing marital woes of Ida's brother Lee Van Belden, owner of the sizable Atlantic & S. P. Transfer Company. He was accused of "associating intimately" with another woman in addition to being violent; the straw that broke the camel's back was the decking of his wife of 31 years in a downtown restaurant and leaving her on the floor, out cold. Kicked out of the couple's Serrano Street home, Belden took refuge for a year or two—long enough to use the address to register to vote—at 107. The lurid years of the Hart house had only just begun.

After the departure of the Harts, it could be that 107 Fremont Place was not sold, perhaps only rented, until 1952, when it was described as "vacant and run down" in papers concerning its purchase on May 27 of that year for $49,620.95 by Coy Burnett. An attorney and president of the Monolith Portland Cement Company, Burnett had been living across the street at #104 for eight or so years; his purchase of 107 in the name of a family corporation was to provide a home of their own for his daughter and son-in-law, Anne and John Craig, who had been married in Yuma in 1940. Anne and the Craig children had lived with her parents at 104 while John was in the service. Their initial token $160-a-month rent at 107 appears to have created some tax headaches for Big Daddy Burnett, but these were the least of the troubles trailing the Burnett presence at Fremont Place. While the Craigs were living at 104, their 20-month-old son Christopher drowned accidentally in a stream on his grandfather's Kern County ranch in 1944; two years later, Anne's brother Coy Burnett Jr. died at 21. Despite the birth of three more Craig children, these deaths may have been insurmountable events, given what was to follow. Once John Craig was demobbed, he went to work as banker. He and Anne moved out of her parents' house to Santa Monica, but they were eventually lured back into the Fremont Place family fold with her father's purchase of 107, which may not have been the best thing for the ego of the son-in-law of a rich man. Before long, 107 was duplexed, after a fashion—Anne living on one side of the house and John on the other, with their escalating quarrels conducted over the intercom, as she was later to relate to detectives. On October 11, 1955, John failed to respond to a complaint over the wire. Anne went next door to find him on the bathroom floor, dead of an overdose of pills. He left a nine-page holographic will written on the day of his death, which included a poignant apology: "I'm sorry the show has been so badly managed."

Bathrooms, it seems, can be retiled, husbands replaced. Anne and Howard Dale Amacker, by turns bit actor, screenwriter, producer, and director 12 years her junior, took out a marriage license in early January 1958 (the same week as did Jayne Mansfield and Mickey Hargitay) and were married on the 14th. Howard moved into 107. And out, once he and Anne divorced in July 1968. Sudsy.

After Coy Burnett died in 1971 and his wife three years later, the Burnett presence in Fremont Place faded away. The house at 107 was being offered for sale or lease, "in fine condition," in the Times by July 1973.