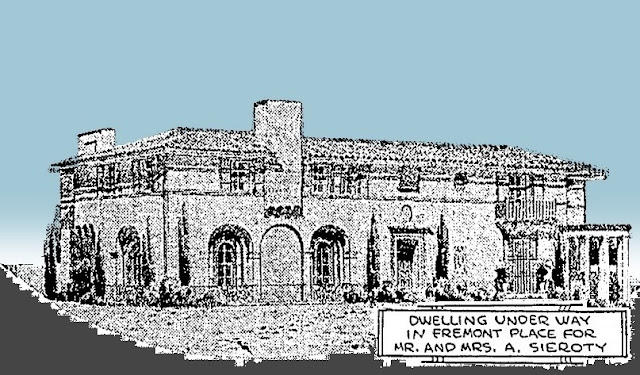 
While the creators of Fremont Place envisioned a lavish enclave of large in-town estates "for men of means," like all good promoters, their advertising hyperbole was directed at homeseeking Angelenos of a full range of pocketbooks. Once the snobbish aura of gated exclusivity had been planted successfully into their collective subconscious, and a few showcase palaces on acre-or-more lots had been built, the aspiring could enter, purses permitting. Perhaps the developers of the Place did actually hope to have within their gates just 48 grand houses; the competition, however, proved to be fierce. The Windsor Square and Hancock Park tracts across Wilshire Boulevard were among the Place's immediate rivals, but fast developing to the west by the mid-'20s were, among other projects, Bel-Air, to which much real L.A. money was moving, hopscotching over Fremont Place and its rivals to build serious estates with a less suburban feel. For the Place, this meant that its lots would be subdivided and subdivided again to the point where the original number of lots would practically double. One such subdivision resulted in a valuable southeast corner property in one of the two prime center blocks—those having no boundaries with non-Place neighbors—that was not built upon until 1926, perhaps reflecting the stiff competition in upper-end Los Angeles real estate. What went up at 85 Fremont Place was your basic Mediterranean house of the period, this one by architect Ray J. Kieffer, an example typically pretentious without being ostentatious. Its builder was not without imagination, however; he just knew where architectural flash was appropriate. The Department of Building and Safety issued a permit for a 12-room house on October 11, 1926. 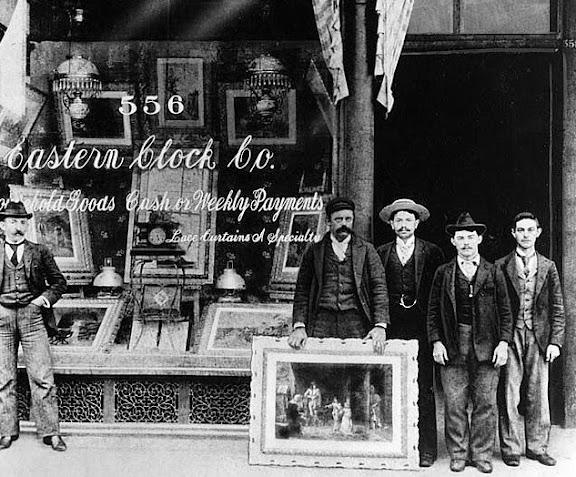 While Adolph Sieroty would build a perfectly nice house in Fremont Place, he didn't play it safe when it came to his commercial interests; no one who opened his first store on a shoestring while still a teenager could have ever been said to have played it entirely safe. Born in Poland on May 3, 1876, Sieroty arrived in New York in the early '90s and was before long settled in Los Angeles, having opened the Eastern Clock Company on Spring Street. Soon he was selling much more than timepieces. Eastern Clock became Eastern Outfitting, purveyors of all manner of household goods. The company grew and grew, eventually spawning a clothing division, Columbia Outfitting.

While bearing a name as important if less well known than other Los Angeles retailers whose businesses bore their name, Sieroty went on to leave the city not just his house in Fremont Place, but with a worthy companion to John Parkinson's contemporaneous Bullock's-Wilshire. Claud Beelman's brilliant turquoise Eastern Outfitting Building opened in September 1930 at the northwest corner of Broadway and Ninth, since 1939 called the Eastern-Columbia Building and now residential lofts. Actually, while the name EASTERN appears prominently on all four sides of its tower along with four clocks in what might be seen as nods to the company's origins, Sieroty was not entirely modest. His name does indeed appear on his business: "FOUNDED BY ADOLPH SIEROTY" is right over the main entrance of the Eastern-Columbia Building, in gold. With a location a bit southerly and away from the other major downtown retailers, Sieroty knew that gold leaf, copper, and all the flourishes, the clock and signage and especially 13 stories of dramatic blue terra cotta, were what were needed to attract shoppers and move merchandise.

Adolph Sieroty died on March 1, 1937, while vacationing in Palm Springs; his son Julian carried on the family business. In 1939 Julian merged Eastern and Columbia, which had had discrete operations in the Broadway building, into a single emporium more along the lines of competing department stores. At one time a chain of as many as 39 Pacific coast outlets, Eastern-Columbia closed its retail operations in 1957 and became the Sieroty Company, a commercial and industrial real estate concern still under family control today. As for 85 Fremont Place: Bertha Sieroty, who was a president of the Los Angeles chapter of Hadassah (as was once her neighbor Cecelia Markowitz of #96), and who for her many philanthropic endeavors would rate her own sizable Times obituary, died in September 1944. The house was then sold by her children, who had decamped, perhaps not so surprisingly given the westward tilt of Los Angeles, to Beverly Hills.