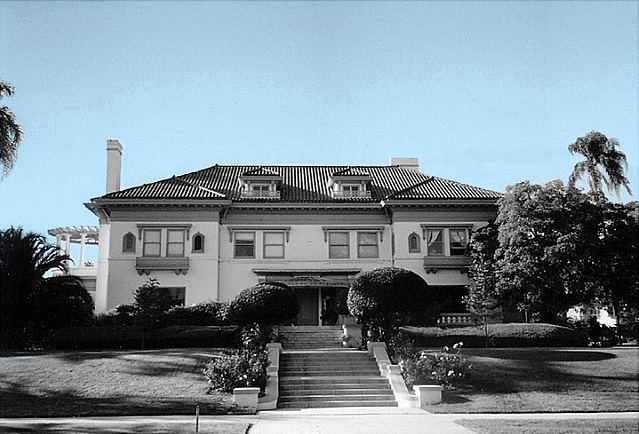 While the Italian Renaissance–inspired 55 Fremont Place has been described repeatedly as the first house built in Fremont Place, Frank E. Horne was already settled into #119 by the time the Department of Buildings issued the first construction permit for oilman Martin Henry Mosier's grand pile on May 14, 1915. Items in the Southwest Contractor and Manufacturer indicated the ensuing progress; while the Times describes Mosier and his family as anxious to get settled, the house's windows, for one thing, were not finished until the following January. An oilman's statement house was not to be rushed, and perhaps couldn't be, given that its eminent architect John C. Austin was also at the time planning the new Los Angeles High School that would open a few blocks away in 1917. The Times reported that the Mosier design called for a seven-bedroom, four-bath dwelling on a lot of over an acre. A green glazed tile roof was specified, and as was standard on almost all substantial houses of the period, regardless of exterior style, the downstairs was finished in mahogany and the upstairs in white enamel.


Born in Punxutawney in western Pennsylvania in 1856, Martin Mosier would have grown up with the scent of oil in the air, a trail of fragrance that would lead him west through the fields of Ohio, Oklahoma, and Texas to California, where climate and beauty and oranges mitigated the stench. Maud Adams Mosier had endured her husband's unsalubrious work locales long enough, patiently raising the couple's two sets of children—12 years separated the middle two—and it was time to settle somewhere in splendor. Having paid yearly visits to Los Angeles for several years, maintaining rooms downtown at the Hotel Clark up to the time of their move to suburban Fremont Place, the Mosiers quickly became, in that particularly rapid Los Angeles way, part of the city's swellest if more conservative circles. (If the Halliburtons of Berkeley Square could do it, anyone could, and a big house on a berm always helped.) As Martin proceeded to become a leading Southern California oil producer—he would be honored by the International Petroleum Exhibition in Tulsa in 1936 as "the grand old man of the oil industry"—Maud became active in Y.W.C.A. and Methodist church causes and looked after her two youngest sons, at least until there was only one. Born in 1900, Martin Henry Mosier Jr. appears to have died mysteriously at 19 in April 1920; in an era when even the Times reeked of yellow journalism, publishing an amazing amount of private information that would be unthinkable today, there appears not to have been even the smallest item concerning the demise of Junior. His parents, active in the First Methodist Church as it was building a new sanctuary on Hope Street in 1923, did memorialize him there by commissioning the center panel of a spectacular glass mosaic triptych, now in an Oakland church, designed under the supervision of Louis Comfort Tiffany of the New York firm that had originally decorated #55.

The Mosier's oldest son, Earl, had been running the family's interests in Tulsa for years before #55 was built; later he was involved with his father in their sideline Sunshine Ranch in the San Fernando Valley, raising Holsteins, hogs, and poultry along with citrus on 4,200 acres. The youngest, Harold, became, naturally, an oil producer himself, after the usual youthful escapades, one of which involved driving too fast along a Pasadena street while on a double date in September 1924 and failing to negotiate a turn. The four escaped death after the car overturned and burst into flames; described by the Times as badly injured, they somehow refused an ambulance and rode off in a taxi back to the protection of the palace behind the gates of Fremont Place.

After Martin Mosier died at 55 Fremont Place on February 13, 1939, his lavish funeral at the house was conducted by the Methodist bishop, with a harpist playing among banks of roses, the decedent's favorite flower. Maud remained at Fremont Place until her death 15 years later, after which ownership of the house becomes unclear. Coldwell Banker was offering it for sale in the spring of 1955, advertising in the Times a "beaut corner improved with aristocratic home" with five bedrooms and three baths (down, somehow, from seven and four) The Reverend James W. Fifield Jr. of the First Congregational Church on Sixth Street, a competitive man of the cloth with a penchant for the good life at least as well-developed as that of the Catholic church's archbishop ensconced at 100 Fremont Place, soon acquired the house. After Mrs. Fifield died at Good Samaritan Hospital on November 15, 1957, the Reverend Fifield decided to scale down his living arrangements a bit. A small display ad appeared in the Times in May 1959 offering the house for sale or lease; Dr. Fifield moved around the corner to 118 Fremont Place. By the next year mortgage executive Thomas C. McMillan occupied #55, followed by the consul general of the Netherlands for a time.


The largest houses of central Los Angeles were the first to lose value as signs of the district's decline began to appear toward the middle 1960s. The Watts disturbances in 1965 only accelerated white flight from old neighborhoods to the Westside and the Valley, and as time went by it was not just Fremont Place's big houses that appeared to be in jeopardy, but the entire subdivision, when a plan for wholesale commercial redevelopment emerged. After an alliance of homeowners fought the move, the tract was given a new lease on life; there were then various occupants of the Mosier house, including investment banker Fayette Thomas in the early '70s. On the market for $250,000 in September 1973, Don and Alice Wilfong arrived at some point, before their departure throwing a party in February 1979 to welcome as their successor at #55 the man who would be one of Fremont Place's most famous residents: Muhammed Ali. (Attending the festivities was actress Karen Black, who had moved into #108 not long before.) Ali retained ownership until July 1986, when as part of a divorce agreement #55 was ordered sold. Now over a century old, the Mosier house still stands.